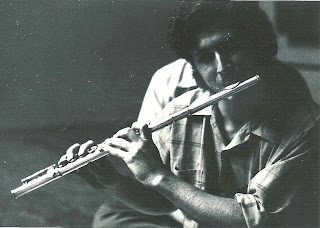 David Lynch and his Artley Flute

Next on the scene was David Lynch, who joined us in late summer after leaving a theater company called Mushroom. David was a roguish, handsome actor with a delightful British accent and carefree sense of humor. Quick witted and articulate, he was a true free-spirit, easy going, a Rastafarian type with a wry sense of humor who enjoyed a good toke as well as a quick turn of phrase. With his long hair pulled back in a ponytail, he would regale us with songs plucked on his nylon-strung guitar. 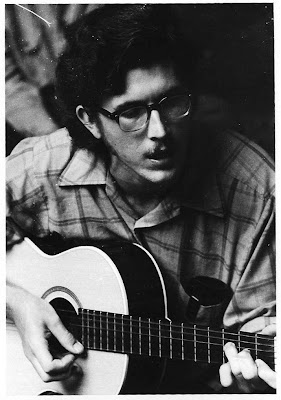 David tells of his entry into the Loft:


"I first met Shipen in the very early spring of 1970. He was a friend of John Amen who was one of the movers and shakers in the Broadway musical Hair. I met Ship at John's place on 47th Street just west of Ninth Avenue, when I was living on 44th Street in the same block. John would have soiree/musical parties at his place with fantastic sing-alongs of every conceivable Broadway show and tune.

When I was introduced to Shipen he was just about to embark on a journey of survival on the British Island of St. Lucia, staying in the wild away from the tourist areas and hotels and such. I recall that part of his quest was to quit tobacco too. Anyway, Shipen came over to my apartment one afternoon before he left and we had a great get together, drinking bancha tea, and exchanging musical, philosophical, and social ideas.

Over the spring months, John and I became good friends and we wrote some tunes together and talked for hours about community ideals. Around May or so an "Employment as Butler and Housekeeper" scheme in White Plains that my girlfriend and I were hoping to net went belly-up and fell through. I had already given the word to my roommates that I was leaving town so my roommate thing evaporated and I "emigrated" from the West Side across the Hudson to East Orange, New Jersey for my period of exile from New York. The move did get me in closer contact to the other guys in a potentially-happening rock band affair I was having called Sweet Ginger. The rest of the band were all from some place called Livingston, way out west in Jersey, and I wasn't quite ready to abandon that possibility of fame, and do the roots thing and return to England.

In early June, Broadway John managed to get a message to me and invited me to be a part of his experimental musical theater/commune near New Paltz. Thrilled to be freed from suburban New Jersey, I jumped at the idea! So that summer we created the Mushroom Commune in High Falls in upstate New York. One weekend in August, on one of those glorious sparkling, full summer kinda days that feels like it could last for a lifetime, Shipen came to visit the commune. He had recently returned from his sojourn in St. Lucia. He easily assimilated the lifestyle of the commune and set up a lovely blue canvas tent in the field by the river in the midst of the Mushroom village of tents. His was a big 9-foot ceiling teepee-like home, adorned with colourful carpets, iconic images and sounds, incense, flutes, pictures of Avatars and saints. We shared some quiet times together and although he said he would not be staying more than a week, I should be sure to come and visit him if I was ever back in the City.


As the summer progressed, the commune had evolved into a fairly cohesive committed group varying from 25 or so folks who had live-in tents to weekend-visiting groups of 40 or 50 friends, friends of friends, and other would-be fungi. After the initial rave successes of our Hair-inspired shows in the large barn/'theatre" at the top of the road on the property, the Musical Mushroom Company also made theatrical presentations in New Paltz, Kingston, and in the other nearby towns of Upstate New York, transporting our "show" on a flatbed truck from town to town and returning to the Mushroom fields exhausted but exhilarated, eagerly planning wilder and more exotic musical conquests.

Thus we continued on week after week. This idyllic "Second Summer of Love" culminated in "sold out" performances in glorious weather on a big field right by Woodstock town over Labor Day weekend and the weekend following, which were the crowning Mushroom experiences. Our gigantic Spaceship-like performance tent was filled to capacity with singers, musicians, dancers, fans and revelers of all sorts. The Mushroom was a grand success.


A few weeks before the Labor Day weekend extravaganzas, an amazingly inventive architect had come up to Mushroom from Philly and proposed, designed, and constructed an incredible GIANT tent that we could perform our shows inside. Blown up with a simple flat fan, it was made of clear polyethylene film and it rose up in the middle of the big field below the barn at the Mushroom commune. Once it was inflated, the simple pressure of the fan was enough to keep it up. Word quickly spread, and crowds flocked to the farm. At night, with our show performing, and the lights and music flashing and booming into the surrounding hills, it really looked and sounded like a spaceship had landed! This was the tent we performed in at the final shows in Woodstock.


The weeks following those Labor Day happenings were by contrast characterized by rain, rain, and more rain with that kind of September drizzly cold that quickly signals the change of season in upstate New York and the seasonal exodus of the masses of vacationers back to the City. Our post-Labor Day weekend shows were disasters. Most everyone was gone! Nonattendance and mounting frustration produced an immediate financial drain and rapid defection of the cast and crew of the Mushroom. Inevitably, the vehement "I'LL Never-Go-Back-to-Gothem!" oaths of stoned, naked Midsummer Glee gave way to - "Hey are you going as far as the Lower East Side? Could I cop a ride?"


So I found myself once again back in the City - East Orange was yesterday's film clips and alas, the magic of Mushroom had become a dream unfulfilled. I remembered Shipen's invitation and soon found my way down to 108 Fourth Avenue, two blocks below the 14th Street Union Square stop off the #6 subway. It was just north of Grace Church, right next to the used book bazaars, three or four storefronts jammed to the rafters with books. I remember opening that big old Downtown Door and peering into the gloom within. With some trepidation I stood in the dank hallway and as I got used to the dimness, I could vaguely make out candlelight up on the first landing. I sprinted up the stairs to the landing and turned around. Everything was all closed up. I sped on to the next floor and the next, passing little luminaries at each turn. Finally the fourth staircase ended at a wool-curtained doorway at the top. Out of breath, I parted the curtain and was suddenly in a brightly lit hallway with a gigantic Industrial Gallery on one side and a very tiny kitchen crowded full of people on the other side.


I was warmly welcomed in. Cooking smells assailed me, signaling the evening feast I was told. There not being much room left in the kitchen I was shown up another staircase - "Mind your head." I emerged into an attic loft with a raftered sloping roof. Dimly lit, it gradually revealed a kind of dormitory setting with tentlike spaces staked out around the walls. Parachute material served as partitions, and mattresses and musical instruments of various kinds became apparent.


Shortly after my arrival a mealtime seemed to be announced as people and dishes ascended from the kitchen below. We all assembled cross-legged on cushions and mats around the central carpeted area; in the middle of which an immense feast was laid out. No one seemed in a hurry to eat. My friend Shipen himself emerged from one of the closed-off tented areas and greeted everyone and welcomed us to the loft gathering. And then a kind of cathedral-like silence enveloped us as we sat. Each was left to their own thoughts and a feeling of communal togetherness, which was pervasive and very appealing. The silence grew. It became very deep and very peaceful. There seemed to be no hurry to leave it. And then Shipen read a passage from a leather-bound book that seemed to speak directly to each in the assembled multitude. And the silence talked to our spirits. Later there were other readings, soft voice sounds grew in volume and intensity, seeming to come from us all, singing round about us. This was a far cry from the Mushroom!


Eventually, Peace was there and, bathed in it, we ate and then talked softly. Through the course of the evening various musical instruments appeared and improvisations and songs were shared. Luckily I had one or two of my wooden flutes and felt able to contribute to the evening.


Many hours later I headed back uptown to the pad I was crashing at, but I'd felt a definite kinship to this quietly musical, peaceful place and the eclectic group of people meeting and living there. I had been made most welcome and Shipen invited me to come back any evening for the gatherings.


Life post-Mushroom in the tiny Upper Eastside apartment was a far cry from the freedom and expression of Mushroom. But instead of looking back to that I was drawn more and more to the Loft and its inhabitants. I made several other similar visits to this downtown oasis, feeling peacefully at home there, before I accepted the open invitation to actually "pitch my tent" in the as yet unclaimed, somewhat unexplored western arm of the loftspace.


In order to move in there several Lofties and I began to clear out large, odd machines, industrial relics, leftovers from some distant heyday of manufacturing or assembly. Amongst the clutter we found some giant springs, which immediately were incorporated into the growing collection of musical toys and instruments. Sometimes, at the nightly dinner gatherings, Shipen playing on his sitar and Ariel accompanying him on the four-stringed tambura, would weave wonderful images of distant longing with mystical tones and vibrations and lyrics, the music so sweet, so reminiscent of one of my heroes, the great master Ravi Shankar. And we'd all be inwardly invited to join in, given our parts for a symphony of mystic sounds, like a family, a voice calling us to Love."
Newer Post Older Post Home